A few months ago** (See footnote) when visiting the Brisbane Art Gallery I took a photo of this life-size elephant sculpture. It is rather magnificent, but a bit puzzling. Why is he standing on his head like a giant book end? I checked Google when I got back home…

“More than a million dollars was spent on this single piece of art,  commissioned by an artist who doesn’t live in Queensland or Australia for that  matter.”

Ms Bates insisted her comments about government waste were “not a smear on  the artist or the sculpture” but argued the state funding would have been better  spent helping the Queensland arts sector.

The sculpture was funded by the state government’s art+place Queensland  Public Art Fund and the Queensland Art Gallery Foundation.

Parekowhai was one of three  internationally acclaimed artists shortlisted to produce a sculpture to be  located between GOMA and the Brisbane River.

The Queensland Art Gallery argued the proposed sculpture responded to the  cultural and historical significance of Kurilpa Point.

“A life-sized bronze elephant, which on closer inspection is revealed to be a  bookend, is flipped on its head. Its eyes gaze directly into those of a kuril,  the native water rat that gives Kurilpa Point its name,” the gallery  said in a statement to the ABC earlier this year. 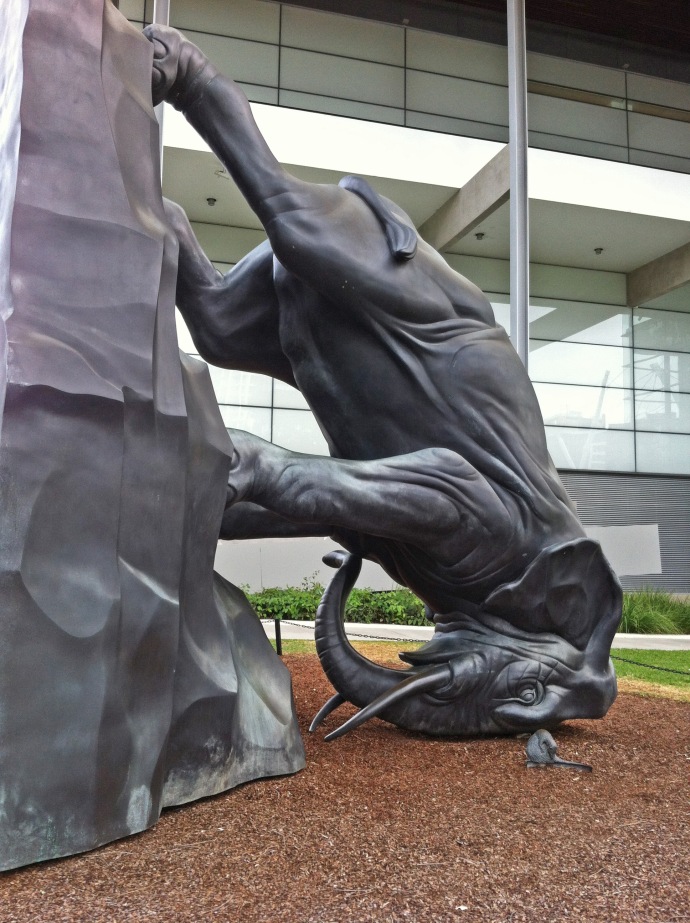 Look what I saw…

A footnote to this story: I did not take my camera, so for the first time I pulled out the IPhone and was very surprised, on an overcast day, at the detail the phone captured. I think I am a convert…

A second footnote: When I checked back I was astonished to find it was three years** since I took the first photo. Unbelievable! Where did that time go…

A third footnote : I am linking this to Ailsa’s (Where’s my backpack) “travel theme” of “close”