The Entrancing Land of the Hobbits.

This is the story of a sleepy little country town, in the centre of the fertile dairy country of the Waikato, transformed into a tourist mecca and a number one “must see” attraction in New Zealand.

“It was a normal Saturday afternoon in 1998 on the Alexander family farm near Matamata, New Zealand, when there was a knock on the door that was to change lives forever.

The caller was a film location scout, and the tale of how he spotted this ideal setting for the Shire in The Lord of the Rings Trilogy, amidst the Alexander’s sheep and beef farm in the rolling hills of the Waikato region, has been told many times. But the impact of that day 16 years ago and how this small chunk of farmland has become some of the most famous countryside in the world – in a life-changing moment of fate for its unassuming owners – is a story that continues to fascinate.” (Click here to read the rest of the fascinating story)

I have not read the Hobbit books or seen any of the films but, again, after reading about it in the on-flight magazine, I was intrigued to visit this pretty place.

The scene was set by the I-site, a replica of an old English home in the style of the Hobbiton period. Stepping inside it was a hive of activity. Bus tours to the Hobbiton village site run every 45 minutes and a queue of international visitors were waiting to buy their $75 ticket.

The main street of Matamata was buzzing, cafes busy with tourists having a coffee before catching the bus, or wandering up and down exploring the many craft shops, many of them with souvenirs of Hobbiton. We were lucky to find a bed for the night most hotels and motels were fully booked. I remember Matamata from the 1960’s when I milked cows in this area and back then just the locals came into town to do their weekly shopping.

So we booked what was possibly the last bed in town, bought our ticket and climbed aboard the 3-45pm bus to Hobbiton.

As we drove through the farm our enthusiastic tour guide told us the story of how this farm was chosen because it looked like England.  He asked for a show of hands as to how many of the passengers had seen the film or read the book, I sneaked a look around, we were the only ones that didn’t put up our hands.

Looking out through the windows this did not look like England to me, it looked like New Zealand in drought. 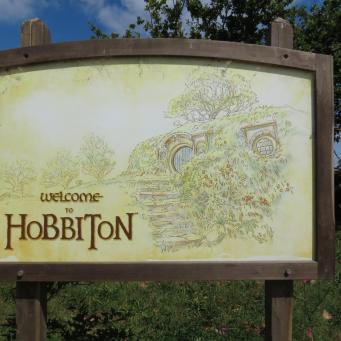 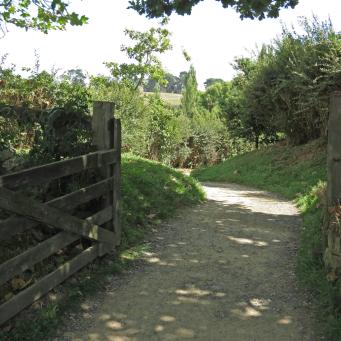 Then we arrived at Hobbiton.

The bus left us to walk through the gate and into the magical Middle Earth world of the Hobbits.

I was totally entrance, it was as though I had been transported back to a small corner of England. The grass was green, the gardens flourished with old-fashioned English flowers. The attention to detail was impressive and very photogenic. We had 3 hours to wander around and lose ourselves in this world of fantasy and I took almost 300 photos in those 3 hours.

Choosing what to show you was very difficult, I will not put all the 300 in, (phew I can hear you saying) I hope the ones I have chosen give you an idea of what this place felt like to me.

Pretty cottage gardens bloomed around all the houses

Cosmos nestles up against the rustic wooden fences

Look at this hand made wheel barrow

Notice the smoke coming from the chimney

Oh shall we peep inside? 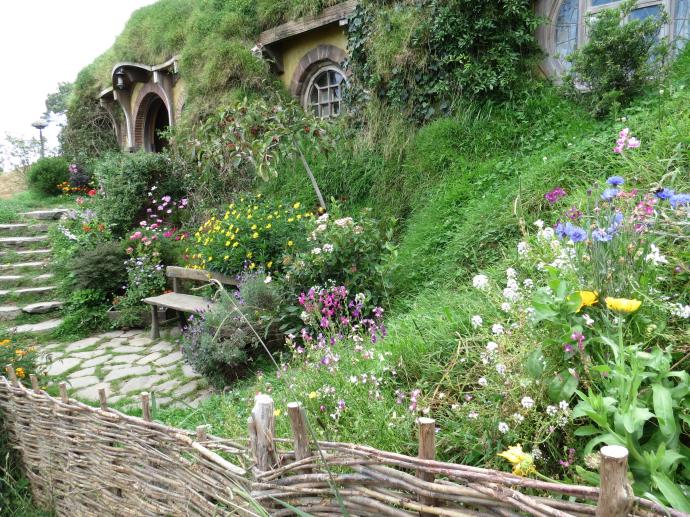 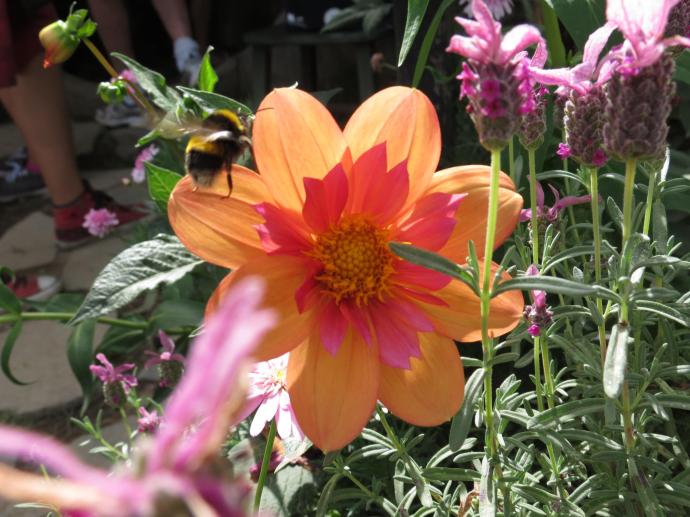 Gourds hanging out to dry

Country style chunky bread (but it was not real) 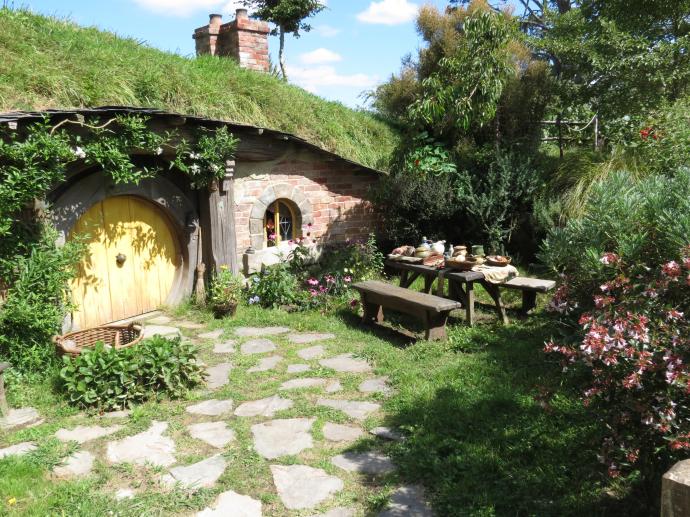 I love this crazy paving 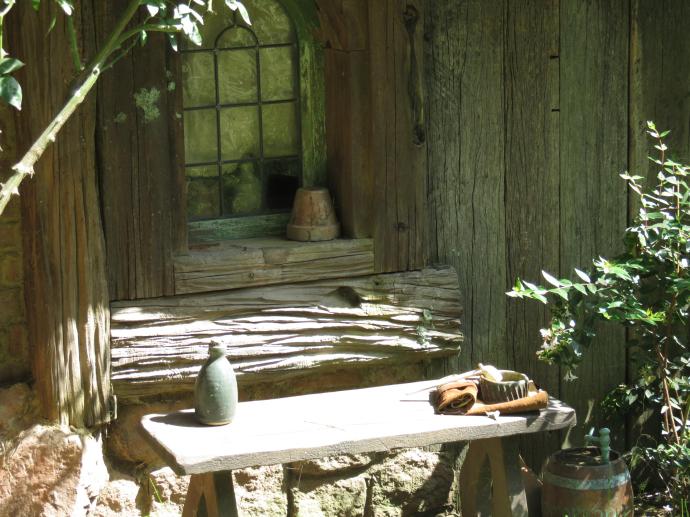 Look at the detail in the window surround

Then we walked past the productive vegetable garden, guarded by a scare crow. 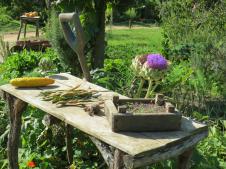 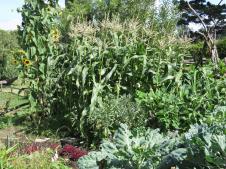 Notice how green this is compared to the part we passed on the bus.

If you look carefully you may spot Jacks white hair in the distance as he walks along , past the ponds and along the path to the “Green Dragon Pub”. Also, can you see the washing on the line? It is all those details that make this such a fascinating and believable journey into Hobbit Land.

The path winds round through a woodland glen

In the distance across the pond we see the Green Dragon

The tour ends at the “Green Dragon Pub” with  folk music playing gaily and setting the scene for a relaxed ale or two in big mugs, or maybe you prefer cider. 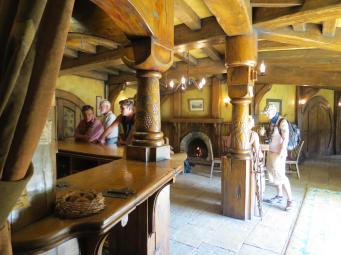 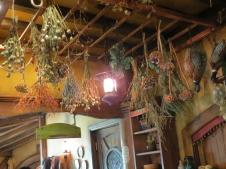 This tour was worth $75. Go here for details of booking a tour.

Hobbiton has totally changed the fortunes of Matamata, many of the locals were extras in the movie and hundreds of jobs were created in the building and now maintaining the village. 160 people still work as guides, bus drivers, gardeners etc. Our guide told us that on one day this January over 3,000 people visited.

It was an enchanting tour of Middle Earth and I now plan to take out the video and immerse myself in the story of  the Hobbits.

56 thoughts on “The Entrancing Land of the Hobbits.”